Orthodoxy in America
The Exceptional Church in Toccoa, Georgia 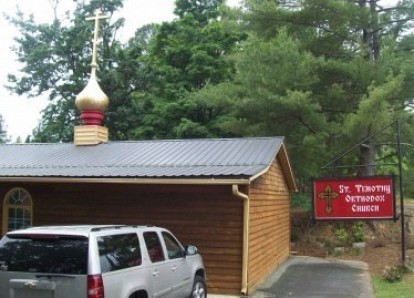 St. Timothy Orthodox Church is part of the “One Holy Catholic and Apostolic Church” (Nicene Creed) as established by Christ through His Apostles, passed down for 2,000 years through their successors, witnessed to by the Martyrs, upheld by the faithful in all generations, and guided and protected by the Holy Spirit. It is our understanding and conviction that the Church is the “Body of Christ” with Him as its Head, against which the “gates of hell shall not prevail”  (Matthew 16:18). We also echo with St. Paul that the Church is “the house of God, which is the Church of the living God, the pillar and ground of truth” (1 Tim. 3:15), as revealed and sustained by the grace and wisdom of God. We, therefore, are part of a historical and spiritual continuum  stretching back to the Apostles in an unbroken transmission to all who would “be saved and come to the knowledge of the Truth” (1 Tim. 2:4). It is neither our intention nor our desire to deviate from the “Way” embodied and established by Christ (“I am the Way, the Truth, and the Life” (John 14:6), but to be faithful participants in the life of Christ through His Church.

The word Orthodox comes from two Greek terms, ortho + doxa, often translated as “right or true belief,” or “right or true worship.” More literally translated, it means right or true (ortho) + glory (doxa). There are numerous accounts in Scripture, both in the New and Old Testaments, of the manifestation and revelation of God’s “glory.” There is the encounter of Moses with God on Mount Sinai, after which his face was so radiant the children of Israel could not look up upon it. Many of the prophets beheld the “glory of God” as far as they could bear it, as did the Apostles Peter, James and John on Mount Tabor when Christ was transfigured in light (Matt. 17:1-8, Mark 9:2-13, Luke 9:28-36). This was a manifestation of His Divine radiance, or uncreated Energy. A common term for this is His “grace,” which transforms, renews, and enlivens us. It is the same “grace” that transformed and enlivened the Samaritan woman at the well (St. Photini, who was later martyred for her belief in Christ) and led her to worship God “in spirit and truth” (John 4:24). Weak in faith though we might be compared to the martyrs and other great witnesses of Christ down through the ages, we also seek to be partakers of this same “glory” or “grace” that we might live in and for Christ unto eternal life and to the glory of God.

Historically, St. Timothy's began as a group of Evangelical Christians led by former members of the “Campus Crusade for Christ.” As some leaders of this Protestant movement began to explore the roots of Christianity and life of the early Church, they encouraged others from the movement to do the same. Determined to examine and reexamine their beliefs about what constituted “real Christianity” in light of the beliefs and practices of the early Christians, they discovered the history, along with the form or structure, of the early Church. It also showed how the essential practices of the first Christians have been preserved in the Orthodox Church  – even if some external customs differed from culture to culture. The details of the Campus Crusade’s journey are excellently recounted in the book Becoming Orthodox, by Fr. Peter Gillquist of blessed memory.

Many original members of St. Timothy embraced the Orthodox Faith and formally became members of our Church beginning in 2002 under the Orthodox Church in America (OCA). While many new members have been added, a number of founding members are with us today. Others have gone on to seminary or moved away, but by God’s grace, our Church community continues to serve the Orthodox in Northeast Georgia and Northwest South Carolina, as well as embracing those seeking the light of faith that never fades, the hope in God that never disappoints, and the life in Christ and in the grace of the Holy Spirit that is the wellspring of true life. Our services are open to all where you will be warmly received and welcomed to join us in our journey to authentic and everlasting life. Glory to Jesus Christ! Glory forever!